Start off your visit at Alte Markt, Potsdam’s new “centrepiece”. When you stroll down the newly created Havel River promenade at “Alte Fahrt”, and walk up the stairs to the Museum Barberini, you can enter Alter Markt directly through the museum. Nearly all buildings were destroyed during WWII, but have meanwhile been rebuilt according to their historic model. Among them, the Museum Barberini, the Potsdam Museum inside the “Alte Rathaus” (old town hall) next door and across from there, the “Stadtschloss” or city palace. Since 2013, the city palace has been accommodating Brandenburg's state parliament. The prestigious Church of St. Nicholas, built by the famous architect Schinkel, outshines the square. The 42-metre viewing platform affords a fantastic view over Potsdam, the Havel lakes and close surroundings. Highest enjoyment of art. 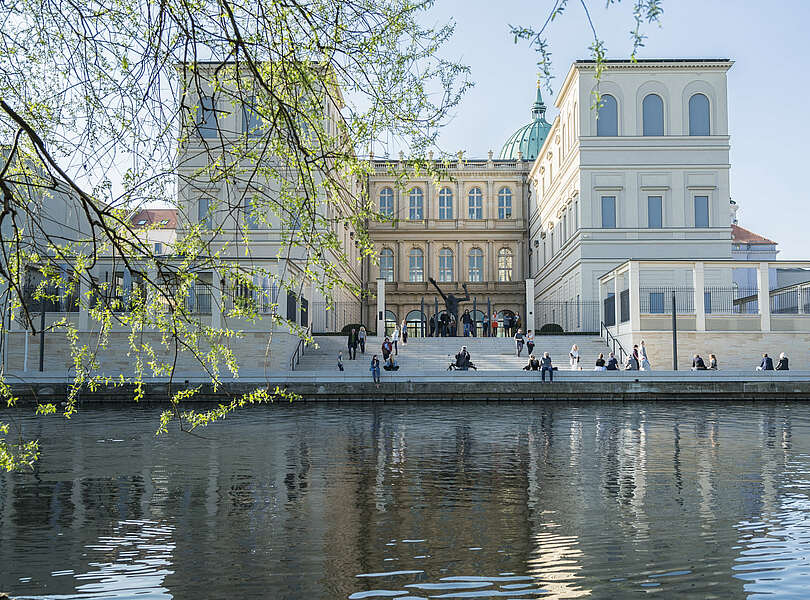 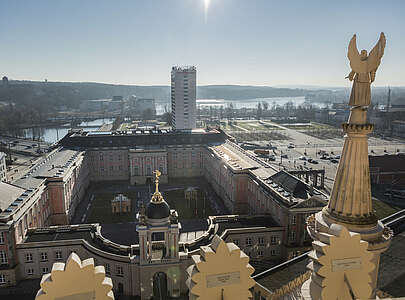 2. Special tip: Museum Barberini - art enjoyment in a class of its own

You've scheduled more time? Then devote a few hours to enjoying art in the Barberini Museum. The exhibition spectrum in Potsdam's new art temple ranges from the Old Masters to contemporary art. Three exhibitions are presented each year.

The historic city centre’s Dutch Quarter impresses visitors with its picturesque architecture of the typical gabled houses. The quarter is considered the largest ensemble of Dutch houses outside of The Netherlands. King Frederick the Great had built the quarter for craftsmen recruited from Holland. Many little shops invite visitors to look around, and stylish cafés lure guests with delicious cakes, biscuits and coffee. Going down the “Brandenburger”, Potsdam's highstreet, past the lovingly restored two to three-storey baroque houses with small and large courtyards, you will reach Potsdam's Brandenburg Gate, the little brother of Berlin's namesake gate.

Take a few more steps from here to reach the entrance of Park Sanssouci. After a few 100 metres, you are standing at the foot of the world-famous terraces of the vineyard on which sits Sanssouci Palace. This impression alone seems overwhelming, however, there are much more gems to discover in the park. Plan for a bit more time to go on a royal discovery journey through this garden paradise created by P. J. Lenné – a true master of landscape art. The Orangery, the imposing New Palace (Neues Palais), the Belvedere on Klausberg, the Chinese House, the Roman Baths and Charlottenhof Palace.

Having enjoyed the view from Ruinenberg behind Sanssouci Palace, you continue your tour in the direction of Cecilienhof and Neuer Garten. On your way there, discover a piece of Russia in the middle of Potsdam: Alexandrowka, a Russian colony built by King Frederick William III to express his friendship with the Russian Tsar Alexander I at the beginning of the 19th century. Savour a bit of Russia and pay a visit to the Russian restaurant in the colony. 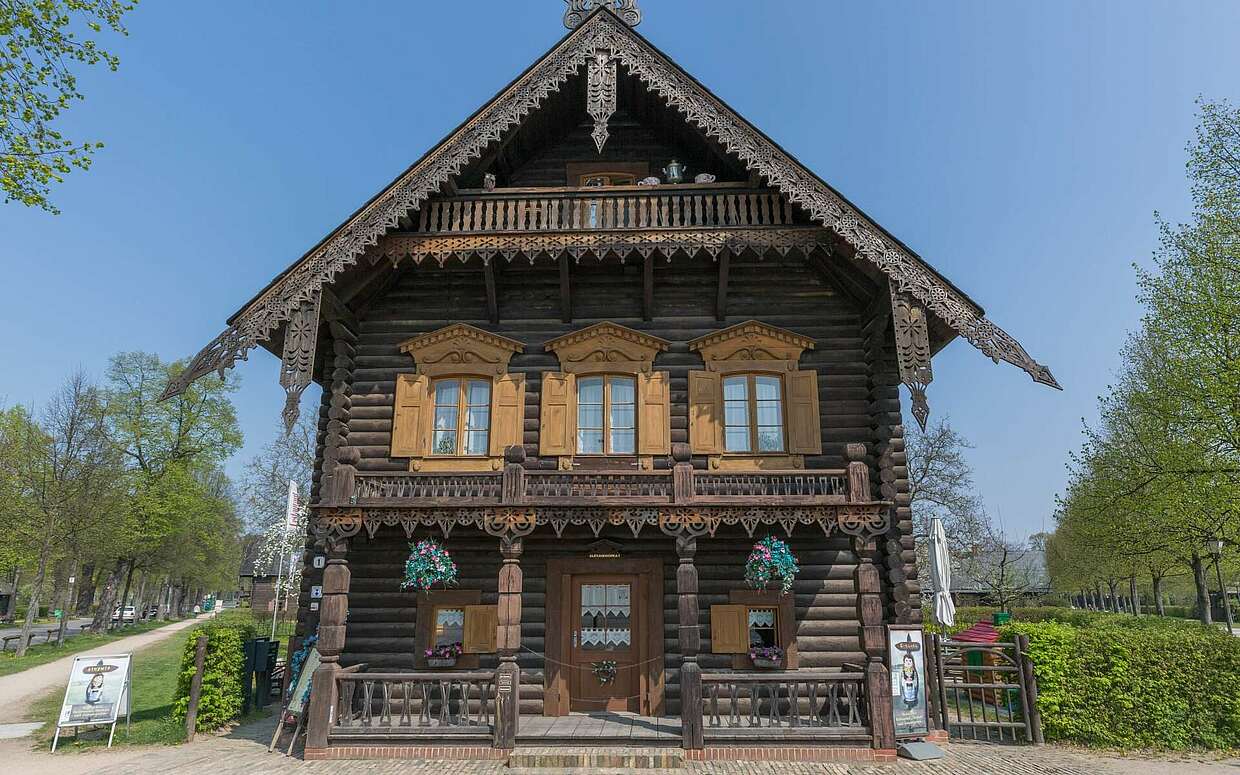 6. Belvedere on the Pfingstberg: Potsdam’s most scenic hilltop view

A stroll around the Neuer Garten takes you past the imposing Marble Palace and Cecilienhof Palace where the victorious Allies met for the Potsdam Conference at the end of WWII. From there you reach the Belvedere built on Pfingstberg Hill, which offers the most beautiful view of Potsdam. The panoramic view across the city and Havel landscape is legendary. On clear days, you may be able to see as far as Berlin.

Rounding off the day…

With so many fantastic impressions you return to the cafés and restaurants in the city centre between Nauener Tor and Luisenplatz where you can recall your day while treating yourself to some culinary delights. Fancy a concert or theatre visit? Find the event that suits your taste by selecting a cultural venue like Nikolaisaal Potsdam or the cultural waterside quarter “Kunst- und Kulturquartier Schiffbauergasse” with its Hans Otto Theater for an unforgettable night. Spend a night in a central location in a classy hotel such as “Am Jägertor” or “Altstadt Hotel”.

1. Navigating the World Heritage aboard the “Weiße Flotte”

The day starts off with a tour on a steamer operated by Weisse Flotte, taking you on a rendezvous with Potsdam’s charming landscapes along the Havel River. Starting point is Potsdam Harbour at Lange Brücke near the main train station. The popular palace round tour or “Schlösserrundfahrt” takes approximately 1.5 hours. From the water you have an extraordinary view of Potsdam’s palaces and parks declared a UNESCO World Heritage. In a leisurely pace, you pass by an unprecedented landscape of parks and gardens designed by the landscape architect Lenné along the Havel River. Once established by the kings of the Hohenzollern dynasty, most notably King Frederick the Great, the park ensemble is considered the centrepiece of the “Prussian Arcadia”.

Palaces and gardens on either side of the banks

You are gliding past Babelsberg Park and Palace and pass under the famous Glienicke Bridge. The landscape around the bridge where the border once separated East and West is dense in palaces and gardens. Discover the Church of the Redeemer in Sacrow (Heilandskirche) and the magical palace on Peacock Island, or “Pfaueninsel”. Another architectural gem you are going to marvel at from the water is the New Garden with its Marble Palace and Cecilienhof where the Allies signed the Potsdam Accord in the summer of 1945.

Back ashore, seize the opportunity to refuel in one of the cafés and restaurants at Alter Markt or Filmmuseum. Later you are heading to Babelsberg. Begin your exploration of this multi-faceted district of Potsdam by strolling around the romantic Babelsberg Park. Discover the many enchanting edifices on the hilly paths winding through the park such as Flatow Tower, the Matrosenhaus or the Gerichtslaube.

More time to spare? From Nowawes…
At the bottom of the park lies the former Weavers’ Colony named Nowawes, today’s Babelsberg. In the mid-18th century, Frederick the Great ordered Bohemian weavers who were fleeing religious persecution to settle here. Spend some generous time here for a round tour of Potsdam’s idyllic district with its lovingly restored one-storey colonists houses where the weavers had once lived.

…to the villa colony Neubabelsberg
Another must-see is the villa colony Neubabelsberg. The colony attracted industrialists, bankers, and artists who settled here since the end of the 19th century, erecting impressive residential villas. Upon the completion of the UFA film production halls at the beginning of the 20th century, more and more actors and film stars relocated here. The legendary Truman Villa, for instance, is said to have accommodated US president Truman during the Potsdam Conference in 1945. 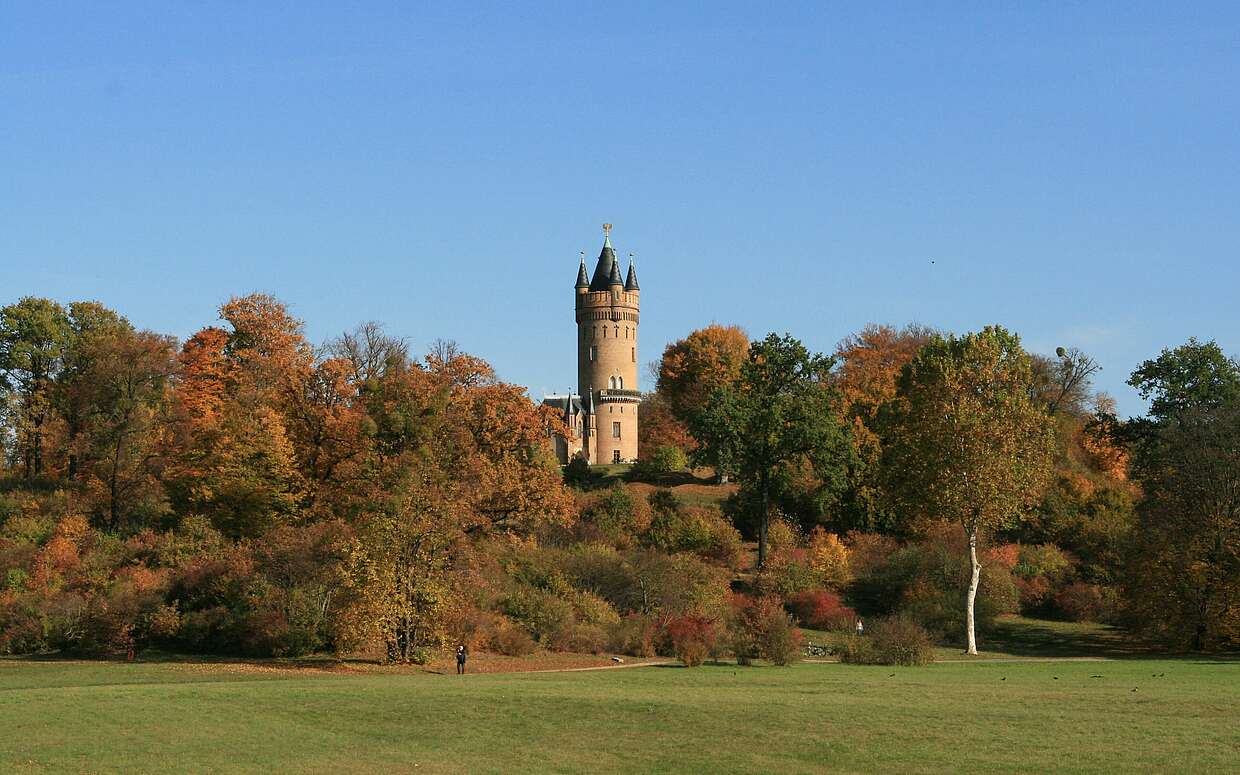 Babelsberg Palace was modelled on Schinkel's architectural plans for a Tudor-style house with battlements and turrets. Meanwhile, it has been restored extensively, shining in new splendour. In terms of the landscape, the palace grounds are artistic wonders filled with numerous water features. The so-called “Pleasureground”, which wraps around the palace with its subtle paths, scenic views and water fountains, bears testimony to the eccentric creations designed by landscape architect Hermann von Pückler-Muskau. Get excited by the view from here of Potsdam's lake landscape and the legendary agent bridge. Glienicke Bridge, which once separated the East from the West, signifies German unity today.

Cineasts and film enthusiasts who prefer to skip the park are heading directly to Filmpark Babelsberg, Europe’s largest and oldest film production site. It is located in close distance to the villa colony of Neubabelsberg on the other side of the train tracks. Today, the historic studios are busy producing national and international films and TV shows. Take a peek behind the scenes and watch breathtaking live stunts.

Rounding off the day…

Treat yourself to a wonderful night with a cultural programme on the schedule. Visit Nikolaisaal or Hans Otto Theater or conclude your night at Schiffbauergasse by chilling on the Theaterschiff or the Marina at Tiefer See, offering a marvellous view of the Havel River.